When we first met Hagit Pincovici, there was an immediate understanding regarding the importance of enveling with evocative references each piece of design. 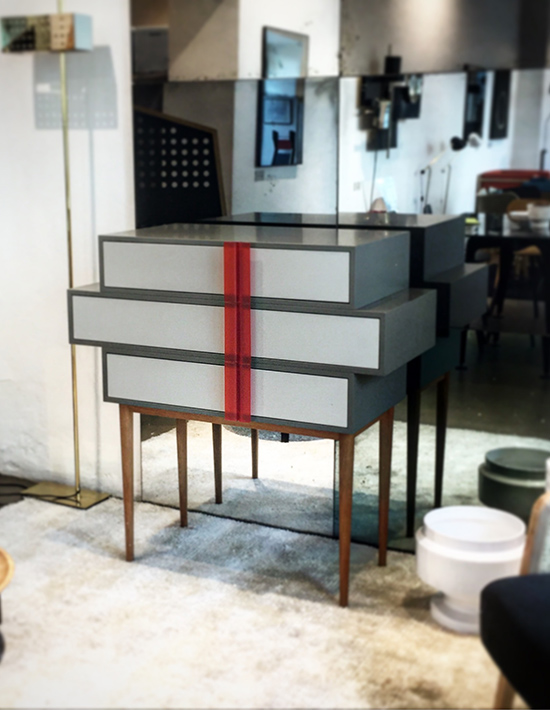 A-line is not a nomadic object in its use, but it is in evocation: three large travel trunks in “grey silex” and “shadow grey”, wrapped in a leather belt with the colour of “alchermes” and resting on a wooden base.

‘“Nor had those antagonistic forces been dormant, which are always at work wearing down the surface of the land; the great piles of strata had been intersected by many wide valleys, and the trees now changed into silex, were exposed projecting from the volcanic soil, now changed into rock, whence formerly, in a green and budding state, they had raised their lofty heads”

— Charles Darwin from “Passage of the Cordillera

Two travellers, worn out by the heat of the summer’s sun, laid themselves down at noon under the widespreading branches of a Plane-Tree. As they rested under its shade, one of the Travelers said to the other, “What a singularly useless tree is the Plane! It bears no fruit, and is not of the least service to man.” The Plane-Tree, interrupting him, said, “You ungrateful fellows! Do you, while receiving benefits from me and resting under my shade, dare to describe me as useless, and unprofitable?

—
Some men underrate their best blessings.” from Fables of Aesop

Considered a medicinal drink and “Elixir of Long Life”, the Alchermes was produced inside convents. It was the favourite liqueur of the Medici family, insomuch that when Caterina married in 1533 the King of France, she brought this distillate with her, making it known as the “liquor of the Medici”.

The original recipe is still prepared by Officina di Santa Maria Novella in Florence. The spices are put to macerate in alcohol to obtain the so-called “dyeing”, then sugar, cochineal powder, rose water and rind and orange blossom are added. The whole is mixed and put to rest for at least 6 months.